We bring our white doves in time at the place agreed.
Doves will take off, perform some circlings in the sky over the heads of people and will go towards their loft.

WHERE: our service is available in Rome and surrondings. Our birds can home from distances of about 50-80 km and larger The lofts are about 20 km in the NortWest of the city.

WHEN: spring and summer months are the best suited but our doves can fly in any season. In late summer they moult and this could reduce the availability of the birds in perfect condition for the service. From October till February when the hunting season is ongoing in Italy, only Tuesday and Friday are no-hunting days. So release of birds can be restricted on other days and should be discussed. We do not release our doves on raining days. In addition doves are not released before or after sunset because with darkness the birds do not like to fly and,if forced to stay out of their loft overnight, they can be exposed to risks.

HOW: we propose several release options that can be additionally discussed and improved.
We have about 120 white doves but in general we deploy for each service 25-30 birds.
In general we arrive on the release site (be it a church or a non religious place) before the beginning of the cerimony and we stay discretely apart until all the invited people has entered the church. Then we prepare our setting for the release when the newly-weds, which will be the last coming out from the church after the wedding, will cross the main door to go outside and join their friends.
A typical service for a wedding in a church in the historical center of Rome can be performed in two main ways:
-a) we place two large baskets containing 10-15 doves each out of the church on the two sides of the main door. The basket are white-painted and decorated with plastic flowers and cannot be seen from inside the church (this is important in case the dove release is a surprise of the frineds for the newly- weds). The opening of the basket is controlled remotely in order to synchronise the take off of the

birds. A small white heart-shaped basket with two doves is also placed on a tripod on the door just before the newly-weds will go out.
Bride and broom will open together the cover of the small basket and the two doves (symbolising the promise of their fidelity) will take off. At the same time one of our staff people will open with the remote control the other two large baskets and all the doves will join on a single flock with the two released by the newly-weds. The release of doves usually preceed the trown of rice.

-b) the newly-weds will find a large white basket heart-shaped on the door of the church containing all 25-30 doves. They will pull up together the cover of the basket and the birds will take off and fly in a single flock over the heads of the people.
There are other modalities for the dove release (two doves, doves in single boxes, release during the wedding party, releasing from below the wedding cake) and other can be discussed with us, providing no harm, stress or fear is caused to the birds. 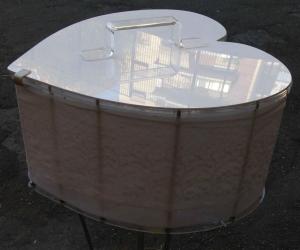 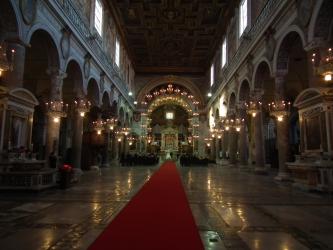 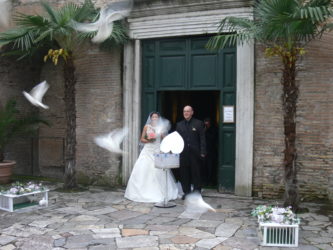 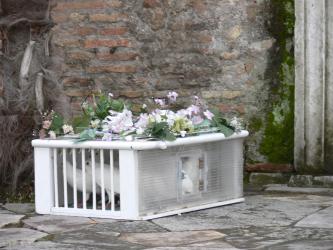 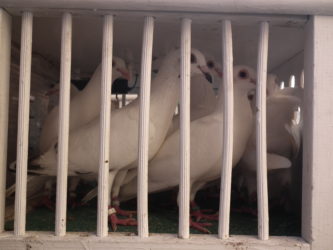